And in this week's episode, the challenge is to make a juicy, succulent, tasty smoked brisket. A daunting task, considering that many BBQ purists consider it the holy grail of BBQ. Something that is awesome when done correctly, but also something that can turn out to be a disaster if the conditions aren't ideal.

Our first step was a visit to our local butcher to procure the cut of beef we desired. You can buy brisket at your local supermarket, but that will get you a 3-4 lb brisket flat or first cut. No, no, no. What we want is the entire cut of brisket. The flat and the point. That will give you a much, much larger hunk o' beef to smoke. Marbled with plenty of fat to keep the brisket nice and moist during the long smoking process. The point, especially, is a fatty piece of beef. I chose a 16.5 lb whole brisket for your smoking adventure.

If you look at the pic below, you will see the whole brisket sitting fat-side down. There is a fat cap on the bottom that is extremely important to the smoking process. We'll get to that in a bit. The flat of the brisket runs along the bottom of the cut and is covered by the fat cap. The point sits on top and can be seen in the below picture on the left side of the brisket. There is also some cartilage or hard fat that needs to be trimmed off the cut before you smoke the brisket. So I trimmed those out, trimmed the fat cap on the bottom to around 1/4 of an inch, and then cleaned and dried the brisket


After cleaning and drying the brisket, I rubbed some yellow mustard all over the cut. This, I've read, helps the dry rub to adhere to the surface of the meat. Probably adds a bit of flavor as well. For a dry rub, I went simple. Sea salt, ground black pepper and smoked paprika. That's it. Many purists just use salt and pepper, but I had this great smoked paprika that I thought would give it an interesting flavor. And I believe it did. After applying the rub, I wrapped the entire brisket in several large sheets of plastic wrap and let it sit in the fridge overnight.

My alarm went off at 4:30AM (that's right) to take the brisket out of the fridge. You have to let the meat sit for a bit before putting it on the grill. By 6:30AM, my grill was up and smoking and my brisket was ready to be cooked. I used indirect heating (the meat never sits above the coals) between 250-275 degrees farenheit, and soaked applewood chips for the smoke. About once every hour, I added some more coals and some more chips. That's more of an art than a science. Sometimes I did it every half-hour as needed. But the idea is to keep the grill closed to keep the heat constant. Oh, and you also cook the brisket with the fat cap up. Something about the fat rendering and melting into the meat. Oh yeah...

I would also mop the brisket every hour or so with a light sauce that I made from apple juice, apple cider vinegar, water and some spicy-hot BBQ sauce. Some folks mop their brisket, some folks don't. It's all a personal choice. I wanted to ensure that my brisket didn't dry out, so I used the mop. In the picture below you can see how the brisket transformed from the first hour of smoking until it was finished and ready for carving.

For the last two hours of smoking, I wrapped the entire brisket in two layers of heavy-duty aluminum foil. Up until that point, about 8-9 hours of smoking, the meat got up to a temperature of around 160 degrees. It hit that point and just stalled. Which is something that happens with brisket. Except that you want it to get to around 190 degrees. That's when everything fatty or hard inside the cut melts, and leaves you with a tender cut of brisket. So into the foil, or crutch, it went. Ladies and gentlemen, the sound of the brisket simmering in the foil as it sat on the grill was absolutely mouth-watering. And two hours later, my trusty meat thermometer read 190 and we were ready to rock.

I let it sit in the foil for about 40 minutes before slicing. The first thing I found was that the point really wanted to separate from the flat as I was slicing. So I did just that. Came off with barely any effort at all. I put that aside and continued to cut the flat. The fat cap on the bottom had caramelized into this crispy, delicious crust. It's indescribable, really. Such an incredible flavor that is added to the tender meat. Then I tackled the point, which was even juicier and more tender. In fact, it came apart more like pulled pork. So delicious. The pics below show the cuts from the flat in the top pan and the point in the bottom pan. 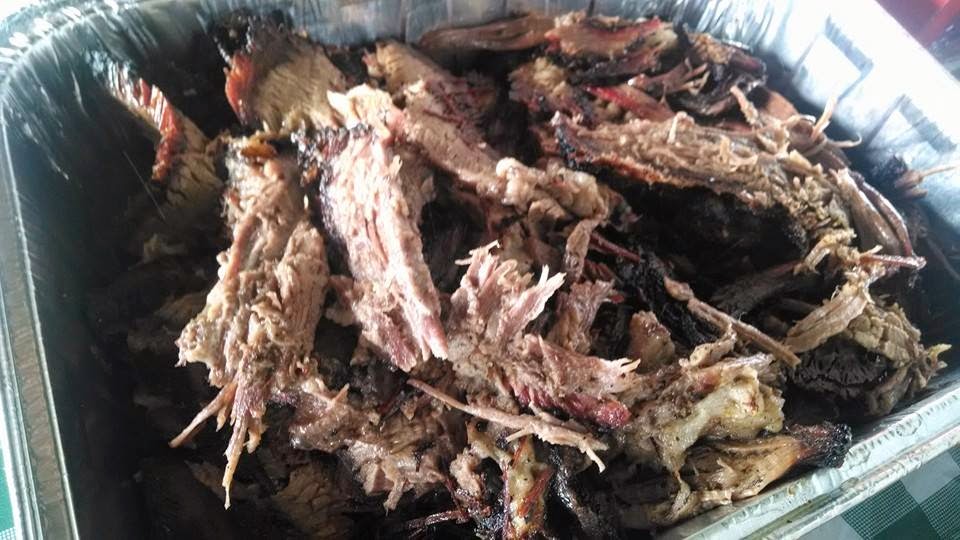 All in all, it was about 11 hours of smoking for a 16.5 lb brisket. I used slightly higher smoking temperatures than some suggest because I wanted to eat by around 6:30PM that evening. We wound up with a cooked brisket of around 9-10 lbs. Enough to feed the small army that we invited over for the day. Side dishes included a mint tabbouleh salad and a bacon-infused macaroni salad.

Some pro-tips from a one-time brisket god.