Lately, a lot of the recipes I've been making use a cup of two of some kind of broth.  Beef broth, chicken broth, vegetable broth.  And I'm not really one for making my own broth. It's something that I just don't do.

Not that I'm overwhelmed by the taste of store-bought broth. And I'm not lazy in the kitchen, but I draw the line at making my own broth.  So it's to the store I go.  I've been avoiding the canned and packaged carton broths lately.  I just don't think they have enough flavor.  So I've been investigating various alternatives.

I like this one. It comes in a concentrated paste in a glass jar.  They have a whole line of organic and vegeterian soup bases.  I've found that it makes a flavorful, rich and hearty soup base even if I use slightly less paste/water ratio.  Most of these pastes/cubes/packets could use a little more water than they suggest.

Comes in a four-pack of little tubs of paste/gel.  Each tub makes around 4 cups of broth.  This one is also good to use as a flavor boost for skillet dishes and the like.  Tasty and hearty.  Much more so than the canned stuff.  Very convenient to store in the pantry as well. 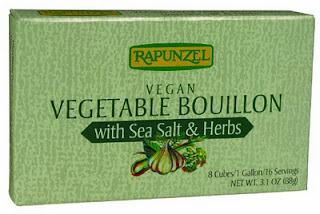 Has anyone else noticed that bouillon cubes look a lot different than they used to?  And not just the packaging. The cubes themselves are a bit moist.  Not nearly as dry as I remember from my youth.  Even so bouillon cubes have usually been my last resort when it comes to broth.  But I've found a few that have changed my mind.

They makes a Vegan Vegetable Bouillon that is damned good.  I would assume that all vegetable stock is vegan, but what do I know.  100% organic, as that is there gig.  I bought the batch with sea salt and herbs added, but you can buy it without that as well.  Made a nice veggie broth.

That's a tomato bouillon with chicken flavoring.  Yeah, the "chicken flavoring" kind of scares me too.  But it makes a really interesting and different broth.  Tomato based, yet you can still tell it's a chicken broth.  This one is non-organic and it has some MSG in it.  But it will do in a pinch.  Especially for Spanish or Mexican food recipes.  I make a chicken tortilla soup that I could see using this as the base.

So what do you use as a stock/broth/soup base when you don't feel like making it yourself?

Email ThisBlogThis!Share to TwitterShare to FacebookShare to Pinterest
Labels: behind the scenes